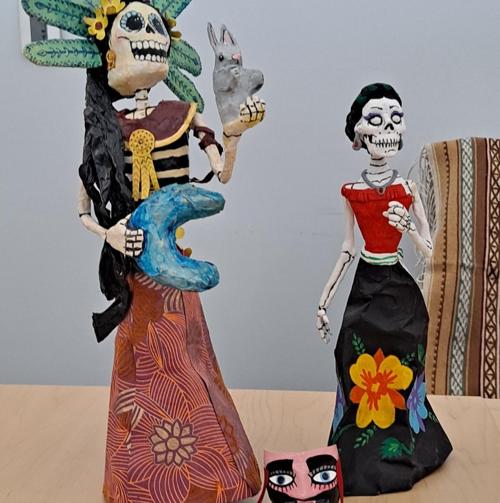 McIntosh Memorial Library has teamed up with the Folk Art Collective to offer a variety of programming via Zoom that highlights work of folk artists in Mexico.

The Mexican artists came together in the midst of the COVID-19 pandemic to face their struggles together.

Laci Sheldon, children’s librarian, said the programing came about after she got to know Gabriela Marvan, an artist originally from Cuernavaca, Mexico, who’s been a resident of Viroqua for three years. Marvan’s art form is cartoneria — a form of paper mache that uses wire and clay for molds, and is stronger than traditional papier mache. In July of last year, Marvan presented a piñatas workshop for the library via Zoom.

Sheldon said that first workshop planted a seed in Marvan’s mind to connect the Folk Art Collective, which she is a part of, with audiences in Wisconsin in collaboration with the library.

The next workshop was in December, and featured Pedro Netzahualcoyotl weaving with natural dyes. Sheldon said he is an indigenous Mexican who has 13 looms and uses wool from sheep farmers in his small community in his work.

“We got calls from Colorado Minnesota, Chicago and Mexico,” Sheldon said.

Since December there has been a workshop held the last Saturday of each month. The next online workshop will be led by Gerardo Figueroa, whose topic is clay sculpture. That Zoom program will be held June 26 at 10 a.m.